These seven stories by Willa Cather, edited by Patricia T. O’Conner and Stewart Kellerman for Rushwater Press, are published here under the title Tales of Town & Country. All but one first appeared in periodicals.

“A Death in the Desert” originally appeared in Scribner’s Magazine, January 1903.

“On the Divide” was first printed in Overland Monthly, January 1896.

“Flavia and Her Artists” originally appeared in a collection of Cather’s stories, The Troll Garden, published in March 1905 by McClure, Phillips & Co.

“The Bookkeeper’s Wife” first appeared in The Century llustrated Monthly Magazine, May 1916.

“Her Boss” was first published in October 1919 in both the American and the British editions of the magazine Smart Set. The version included here is from the American edition.

“Cather is not just a good writer–she is unique, and great.”—A. S. Byatt

“Cather has become, once again…a central figure in the American literary pantheon.”—Hermione Lee 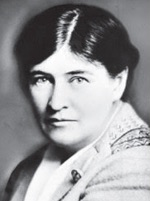 Willa Sibert Cather (1873-1947) is best known for her trilogy of novels of frontier life: O Pioneers! (1913), The Song of the Lark (1915), and My Ántonia (1918). But she was a prolific short-story writer as well, and her stories explored not only the harshness of immigrant life on the prairie but also the sophisticated and artistic city life of the East.

Cather was born in Virginia and moved at the age of nine to Nebraska, where her father briefly farmed and later was a businessman. Cather began publishing stories and articles as a girl in local papers like the Red Cloud Chief, the Nebraska State Journal, the Lincoln Courier, and The Hesperian, the campus newspaper at the University of Nebraska, where she was a student.

In her early twenties, Cather moved to Pittsburgh, where she taught high school, wrote journalism for the Pittsburgh Leader, and contributed poetry and short fiction to periodicals. In 1906 she moved to New York to become an editor for McClure’s Magazine.

Cather’s novels, particularly her prairie trilogy and Death Comes for the Archbishop (1927), were critical as well as commercial successes. She was awarded the Pulitzer Prize in 1922 and the gold medal of the National Institute of Arts and Letters in 1944. During Cather’s lifetime, J. B. Priestley called her America’s greatest novelist, and in our own time A. S. Byatt has commented on “the fierceness and power of her writing.”