Tales of Love and Marriage 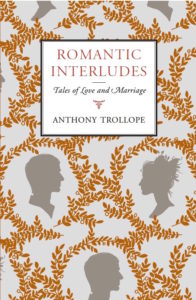 These stories by Anthony Trollope have never before been collected in this form. The text, edited by Patricia T. O’Conner and Stewart Kellerman for Rushwater Press, is published here under the title Romantic Interludes: Tales of Love and Marriage.

“The Lady of Launay” was first published in serial form in Light, a short-lived periodical, in the spring of 1878.

“The Courtship of Susan Bell” first appeared in print in Harper’s New Monthly Magazine in August 1860.

“The Parson’s Daughter of Oxney Colne” was first published in The London Review in March 1861.

“Miss Ophelia Gledd” first appeared as part of a book, A Welcome: Original Contributions in Poetry and Prose, an 1863 collection of original works by prominent literary figures.

“The O’Conors of Castle Conor, County Mayo” was first printed in Harper’s New Monthly Magazine in May 1860.

“Trollope has described again and again the ravages of love, and it is wonderful to see how well, in these delicate matters, his plain good sense and good taste serve him.” —Henry James

Among the many great novelists who emerged in 19th-century England, Anthony Trollope (1815-1882) is known today as one of the most enduring and beloved.

Though Trollope’s father, Thomas, had come from landed gentry, the family was miserably poor during much of Anthony’s childhood. His mother, Fanny, became a successful writer while Anthony was in his teens, and largely supported the family with her novels and travel writing.

Many of his novels were first published in serial form in popular magazines of the day. He also supplemented the income from his novels and from his career in the postal service by selling short stories to magazines. The stories collected here were published in the popular press between 1860 and 1878.